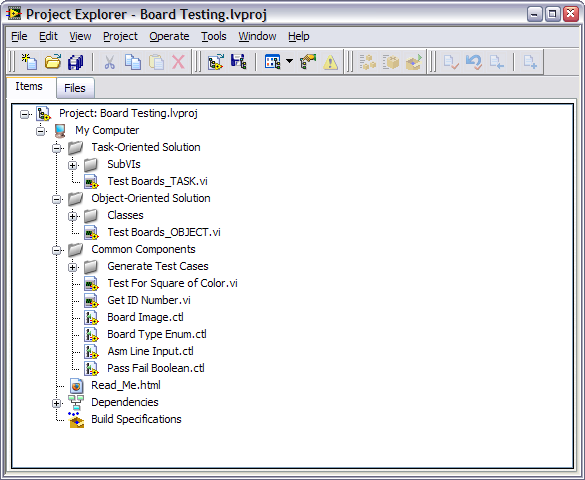 The Project Explorer consists of:

The Items Page shows the contents of a project separated into Targets. Each target represents a platform on which the code will run, for instance, Real-Time modules, FPGA modules, or "My Computer" representing a Windows, Mac, or Linux OS.

Under each target three subdivisions are made:

Dependencies are files used by files inside the code section and not explicitly added to the project. LabVIEW 8.5 and up have separate categories for vi.lib, user.lib and instr.lib.

These builds can be included in an installer.

The Files Page shows the contents of a project by the directory structure on disk. It does not show the entire file system. Instead, it only shows the directory structure of where items in the project or in the dependencies exist on disk. If a mass file move needs to happen, it is better to do it here that using the files system because it allows LabVIEW to update and maintain any file linking.

Project Items are individual items as they appear in the tree in the Project Explorer. They can be:

A list of valid ProjectItems types can be found on the ProjectItem page.

Libraries provide organization within a project as folders do. However, unlike folders, libraries provide namespacing and modularization. In a project VIs must have unique names to avoid cross-linking issues. A library allows for VIs with the same name by providing a namespace for them, the library name is prepended to the VI name.

Some library types allow for nesting libraries (a library inside of a library). LabIEW Project Libraries, LabVIEW Classes, LabVIEW StateChart Libraries, and XControls can be added to other LabIEW Project Libraries or XControls, only the nested library file is referenced in the parent library file, like with projects. Again, this helps with modularization by requiring only the modified library to be updated in Source Code Control and not the parent library. Note: LabVIEW Classes are not allowed to have nested libraries.

There are many types of targets (i.e. Real-time OSs, FPGAs, cRIOs, Raspberry Pi, etc. Code cannot be shared easily across targets. Trying to use a LabVIEW Class by two targets will cause the class to be locked for editing.

Overlays are smaller icons that appear on the ProjectItem's icon that show status or other properties.

The standard toolbars include:

Some optional toolbars, depending on the toolkits installed: