Note: This article uses the term "control" and "indicator" interchangeably.

The Control editor provides the ability to create and modify controls, type definitions and strict type definitions. It works like a front panel but it can only contain a single control and doesn't have a block diagram.

Ways to open the control editor

The control editor can be opened in multiple ways:

Purpose of the control editor 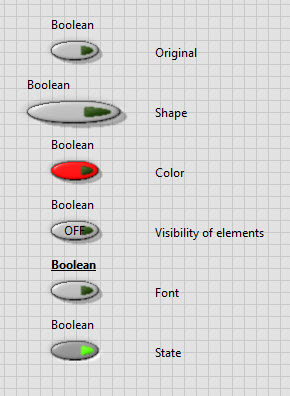 The visual appearance of controls (their shape, coloring, visibility of elements, font and state) can be changed directly on the front panel of a VI. It is, however, not possible to change the fundamental parts (icons, images, relative positions, ...). This can only be done in the control editor.

Also, the control editor allows to store controls on disk for later re-use and to specify the type of control which changes how new instances of the control are related to each other: 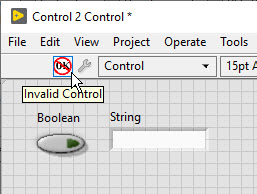 The control editor has two modes: Edit Mode, which works like a regular front panel, and Customize Mode, which detaches individual parts of the control (icon, frame, label, ...). There are multiple ways to switch between modes if the control is valid:

In Edit Mode controls can be customized the same way as on a front panel. There are, however, a few additional functionalities that are unique to the control editor:

In Customize Mode individual parts of the control are disconnected and can be changed and relocated. Depending on the type (button, graph, list, ...) and style (Classic, Modern, System, Silver, NXG) of control, the number and type of parts can vary. It is therefore important to begin with the right control to get the desired flexibility. For example, the mouse hover effect is only available for controls of type System, Silver and NXG.

Important note: It is not possible to add or remove parts from a control. This is a limitation of LabVIEW that was fixed in NXG[citation needed].

Each part is surrounded by a white rectangle. Because parts are often placed on top of each other to achieve the desired visual effect, the Control Parts window allows to scroll and select specific parts. The selected part can then be changed via right-click menu options.

When switching back to Edit Mode, all parts keep their current (relative) position, size and visual appearance. 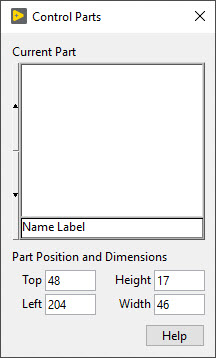 This is the Control Parts window

The Control Parts window appears when selecting Show Parts Window from the Window menu. It contains a picture ring with the individual parts of the current control and input boxes to change the position and dimension of the currently selected part.

Depending on the type of part, additional menu options are available:

Opens a file dialog to select a picture that is imported to clipboard.