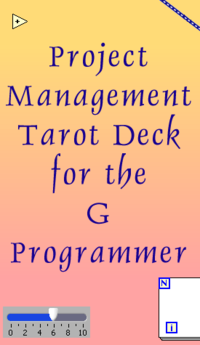 A tarot deck is a deck of 88 cards that first appeared in the middle ages in Europe used in fortune telling. Each of the cards is symbolic of some aspect of life, and by random pulling of cards from the deck, so the story goes, one may intuit answers to questions.

The PMTDftGP brings the power of card reading to the everyday software release manager.

The deck is designed with a graphical, dataflow interface that G programmers will find immediately intuitive. The 22 cards of the Major Arcana have been redesigned to depict the phases of a programmer's enlightenment. The Minor Arcana come in four suits of 14 cards each -- Wires (R&D), Nodes (Sales&Marketing), Structures (IT&Manufacturing), and Controls (Users). Included in the deck is a nifty instruction card for doing a basic reading from the deck, though the deck is fully compatible with all known ANSI standard tarot layouts.