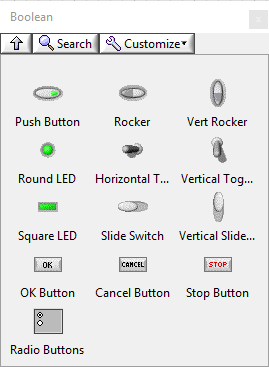 All Boolean controls can display a Boolean text to describe the current state (i.e. ON/OFF):

The Boolean text is a set of up to four strings that can represent the state of the Boolean control. If the text is visible it also toggles the value of the control when clicked.

The Boolean text can be set manually in the properties dialog (only the first two elements), or via the Strings[4] property of the control (all four elements).

If only the first string is set, it will be used for all states (constant). 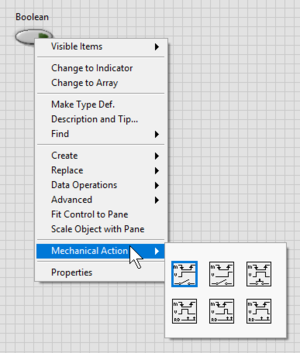 Change the mechanical action on a Boolean control

The six types of mechanical actions are:

The mechanical action not only changes how a control reacts to user input, it also affects how control values can be access from the block diagram if set to any of the Latch actions. The changes are visible when looking at the Value property of the control. While it is possible to just access the Boolean value for switch actions, the type for latch actions changes from Boolean to Variant. The reason for this is, that the latching behavior would cause race-conditions if it was read in multiple places on the block diagram. This is, why only the control returns the actual Boolean value, but not the property node.

In order to access the Boolean value for latch type controls, an event structure must be used. 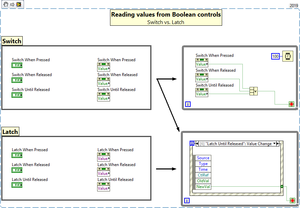