Control references have many benefits. They allow:

There are two types of control references, constants and controls. 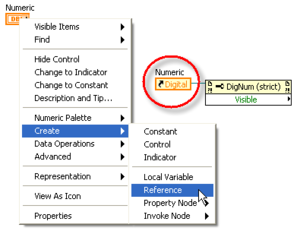 How to create a control reference constant

Its default value is always invalid 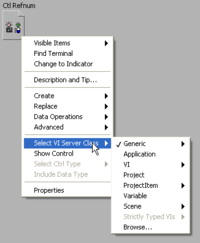 Selecting a more generic class for a control refnum will allow it to accept a wider range of objects. The top entry in each of the sub-menus above includes all of the entries beneath it. For example, selecting GObject will make that control refnum able to accept references from decorations, scales, controls, and panels. This could be a beneficial practice if we want to perform the same, general operation on multiple objects. All controls have the attribute "Visible". Therefore, if we wanted to be able to selectively turn on and off the visibility of our front panel controls, we could have one subVI to do this. This is because we would set the refnum control in that subVI to be of type "Control", so that it would accept all types of controls that we may have. 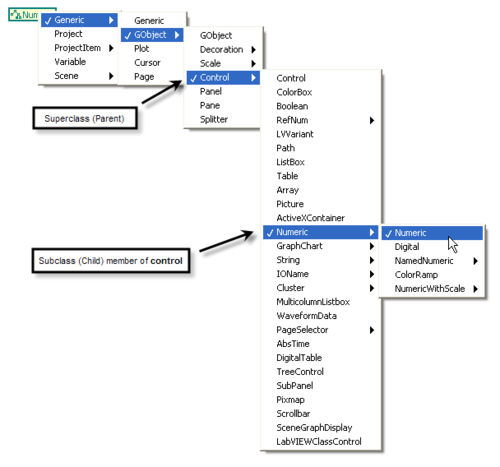 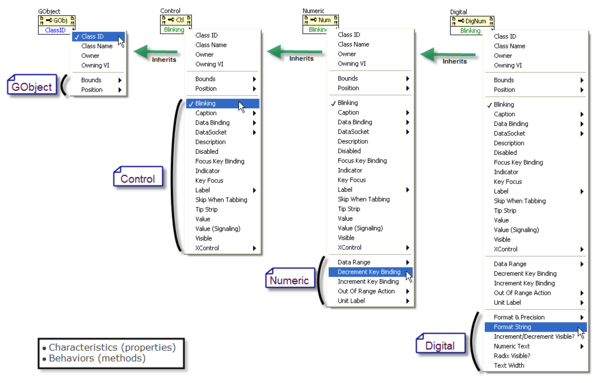 Demonstration of Inheritance in the properties of the various control sub classes.

Examples: String, Path, and so on

Allowing the user to choose refnums to be weakly or strictly typed gives them more freedom in programming. A weakly typed refnum is one that does not contain information about the type of data that the refnum points to. Conversely, a strictly typed refnum does contain the data type for the object that it points to. You can change between weak and strict refnums by right clicking on the refnum (or its terminal in the block diagram) and selecting "Include Data Type" for strict and deselecting it for a weak typed refnum. A red star on the Control Reference Control designates that the refnum is strictly typed. There are different cases for when you may want to use a strict type refnum over a weak typed refnum and vice versa. 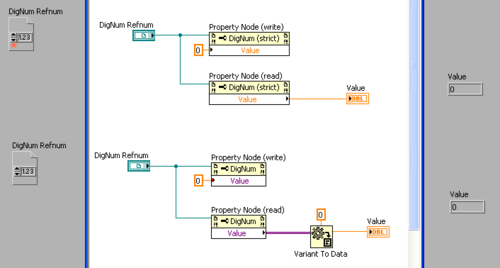 Here we show the difference between strict and non-strict class typing.

A control refnum terminal that is strictly typed can only accept control references that are strictly typed to a compatible type. For example, if a subVI expects a control refnum of type Slide(Int32), you can wire a control reference of type Slide(Int32), Slide(Int8), or Slide(DBL), but not Slide(Cluster of DBLs). Wiring in the Slide(Int8) or Slide(DBL) will result in type coercion (no error) and thus a coercion dot as these representations are being coerced to Int32. Wiring the Slide(Cluster of DBLs) will result in a type conflict (error) and thus a broken wire. This is because the Int8 and DBL are numerics like the Int32 and can thus be coerced to be of Int32 representation. The Cluster of DBLs however, is not a numeric, but a totally different data type. Therefore, a cluster being of different data type than the numeric will result in a type conflict if wired together. Strictly typed references are most beneficial when you know exactly what type of data you will be using.

You should close references explicitly
LabVIEW closes them when VI goes idle but they accumulate until then
Use Dotted notation instead, if possible

A reference property can be dotted in one Property Node. For example, you can have Label.Text property. It is equivalent to getting a reference to a control label and wiring that to another Property Node to get the label’s text. The only difference is that with the dotted property, LabVIEW does not allocate a reference to label.

Type Casting to Another Class

Use it with properties that return generic types
Returns error at run time if the casting is not valid
Use it to find out the type dynamically.
use the Class Name property (very powerful)

This shows how you can typecast to another class.

Example of using the Controls[] property
Retrieved from "https://labviewwiki.org/w/index.php?title=Control_References&oldid=2974"
Category: