From LabVIEW Wiki
(Redirected from Actor Framework is not as hard as you think and here is why)
Jump to: navigation, search
by Quentin"Q" Alldredge, Q Software Innovations, LLC

This started due to a conversation I had at a Users' Group. I stated during my presentation that the Actor Framework is not as hard as everyone makes it and that it really is just an Object-Oriented implementation of the Queued Message Handler Design Pattern (this is an oversimplification but the concepts are the same, see Actor Oriented Design Patterns). One colleague then asked how to make the transition. Hopefully this article will answer that question.

The basic components of a QMH is:

Below is a basic program created using the QMH Design Pattern.

It is this cluster that defines the data type of the Message Queue.

Communication from the EHL to the MHL is through a queue created with the Message Cluster as the data type.  This queue created in the initialization step before the EHL and MHL are started.

Communication from the MHL to the EHL is through one or more User Events of whatever data type is needed.  These User Events are created in the initialization step before the EHL and MHL are started.

The Actor Framework is just the QMH without having to create your own MHL and Message Queue. 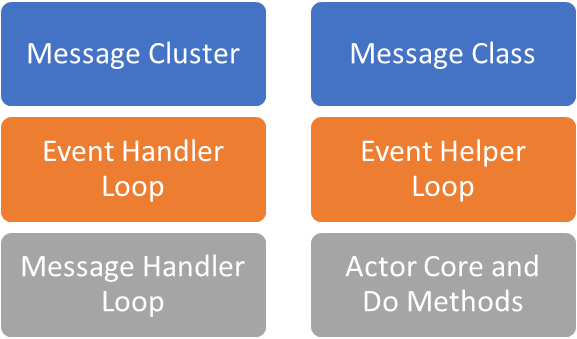 Comparison of QMH to AF Components

Your main code will exist in a Class you create and inherit from the Actor Class.  The main code exists in the Actor Core Method which is an override of the method in the parent Actor Class.

Translating the QMH code to AF code now looks like this:

The EHL becomes the Event Helper Loop in the Actor Core Method.  It still enqueues Messages based on the execution UI Events or User Events and still consists of a standard Event Handler Design Pattern with an Event Structure and While Loop.  The only difference is the queue that is used.

The Call to Parent Actor Core and Do Methods

Under the Hood in the Actor Framework the parent Actor Core Method consists of a loop that dequeues incoming Messages and dynamically dispatches the Do Method.

The code in the Case Structure that would have been in the MHL becomes overridden methods in the Message Classes.  These methods are called the Do Method.  The Do Method wraps a method of the Actor Class that executes the code based on the Message.

To enqueue a message do the following:

If updated data is sent with the Message, there will be inputs for it in the Send Methods

Communication from the Event Helper Loop to Parent Actor Core is through a queue that is created by the Actor Framework (AF).  Its data type is the parent Message Class where any child of the Message Class can also be enqueued.  The Message queue is obtained by the AF method “Read Self Enqueuer”.

So now, I have a QMH Program that I want to convert to AF.  What should I do?

Well, it is probably easier to start with AF that to convert but here are the steps to take if you were to do this:

This has become significantly easier in LabVIEW 2018 (before LabVIEW 2018 view documentation).  To create an Actor simply right-click on My Computer in the Project Explorer and select New-->Actor. 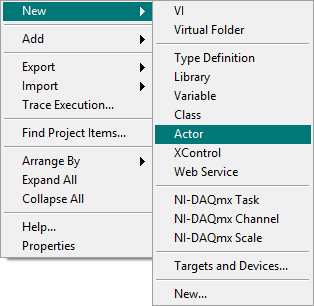 Next, give your actor a name. 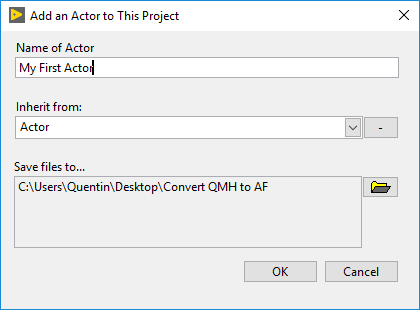 Give Actor a Name

Select where to inherit from.  Most likely you will only have one choice unless you have other tools installed.  (I like using MGI’s Monitored Actor for debugging purposes.) 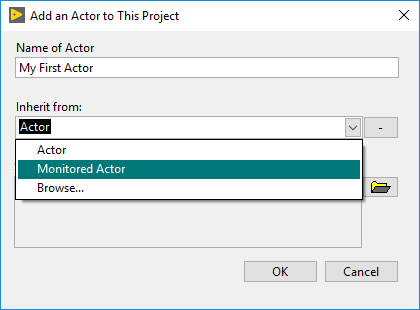 Select where to inherit from.

A library, class and two virtual folders will be created for you. 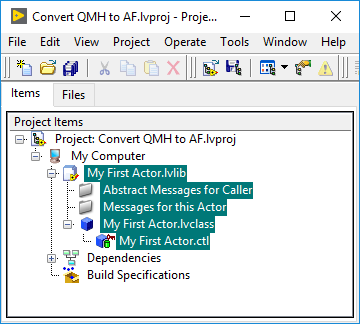 Project after Actor is created.

2. Add your QMH VI and all SubVIs to the Class

Find your code for your QMH and add it to the Actor.  You can organize SubVIs later. 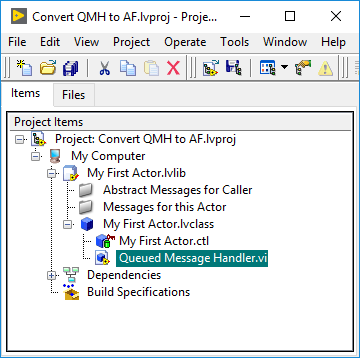 Right-click on your Actor and select New-->VI for Override…

Select Actor Core, Pre-Launch Init, Handle Error, and Stop Core and click OK.  A VI will be created for each of these which we’ll edit in the next steps. 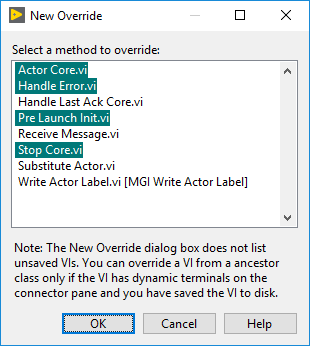 Edit the Pre-Launch Init Method to add the Create User Event code.  Add the User Event references to the Actor Class Private Data so they can be bundled into the class.  The Private Data and code should look like this:

Create the User Event Reference and Bundle into Class

Edit the Stop Core to send the Stop Event and close the User Event references.

For this example, my state data was the “Count” and was stored in a shift register in the MHL. 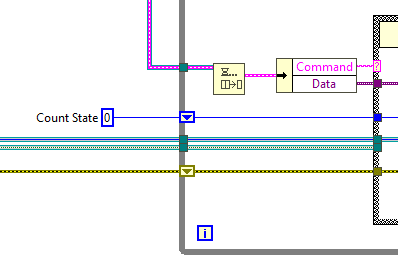 I’ll add this to my Class Private Data.

This might be the only real tricky part because this is the main business logic of your code.  For this example, my MHL had four cases in it:

So, I need to create two methods for Increment and Decrement.  These methods are almost identical.  Make sure to include “Amount” as an input in the Connector Pane. 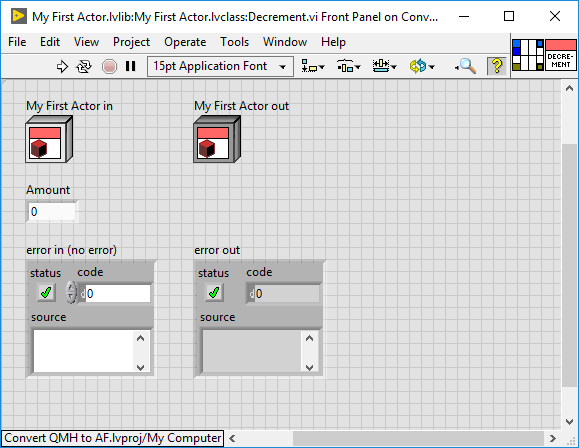 These VIs perform the operation on the state data and the send a User Event to update the count in the UI.  This is exactly how the MHL cases performed.

Creating Messages from the Increment and Decrement methods is accomplished through the Message Maker in the Tools Menu (Tools-->Actor Framework Message Maker,  I use MGI’s version of this tool because of the added features or better icons and the ability to update previously created messages). 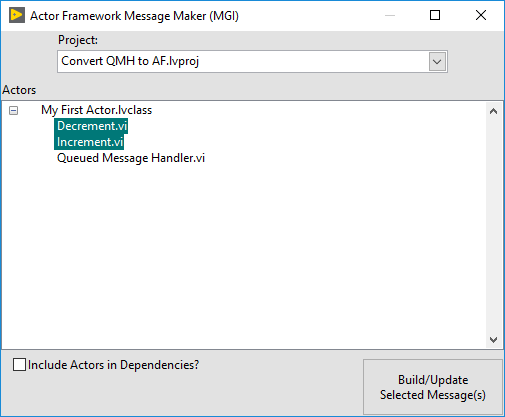 Select Methods to make into Messages

The Message Classes, the Do Methods, and the Send Methods will be created. 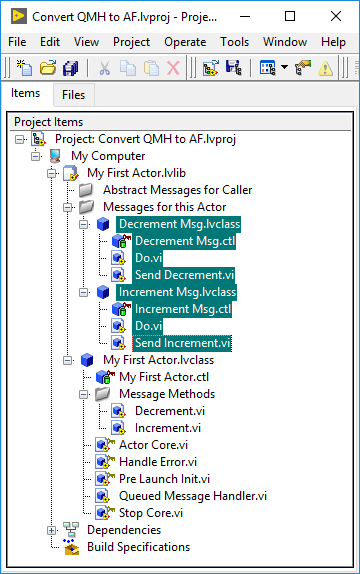 Project after Messages were created.

Now it is time to create the Event Helper Loop in the Actor Core.vi.  You can copy over the EHL into the “Actor Core.vi”.  Shown below with some organization.

Copying the EHL from the QMH

Now add in the Message Queue by using the AF method “Read Self Enqueuer” and add the User Event Registration.

Next change the Message enqueuing to the Send methods of the Message Classes for the Increment and Decrement event.  For the Stop and Panel Close Events use the built-in AF method, “Send Normal Stop”.

An Actor cannot launch itself, so the last part of an AF project is the “Launcher.vi”.  This can be named something else and can be disguised as a splash screen or whatever.  Use the built-in AF method, “Launch Root Actor” with the “Show Actor Core Front Panel” flag set to TRUE.  Run it and everything should run as you would expect.

Why use AF over QMH?

Sure Actor Framework had it hang-ups in the beginning like:

A lot of these problems have been solved in the newer versions of LabVIEW and in addons like the:

The Main Consideration is This…

When you start to have more that one module in an application or more operations that must happen in parallel or asynchronously then you need a more expandable framework.  The Actor Framework is made just for this purpose.  Other addon tools expand this further like MGI’s Panel Manager.